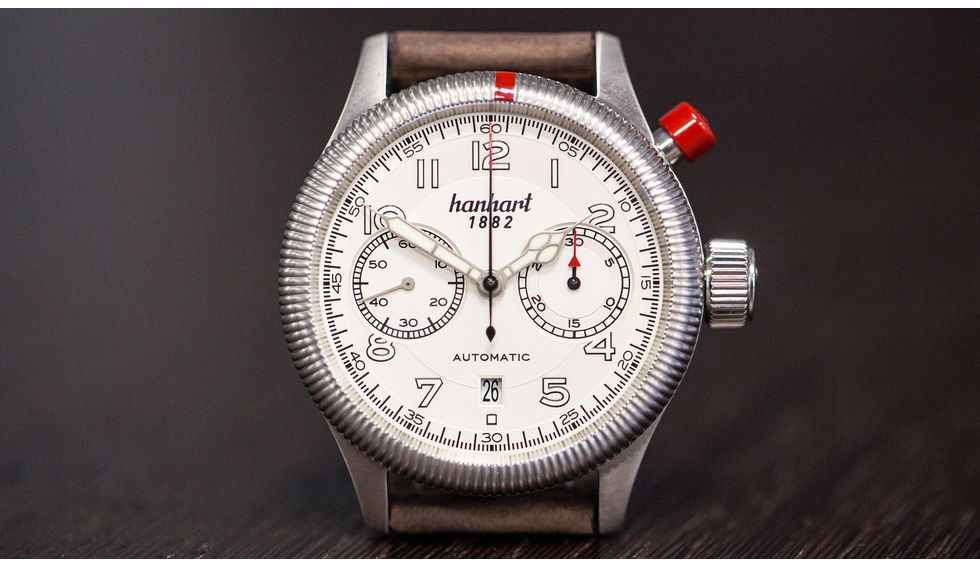 “Highest precision and reliability, perfect readability, and robustness of our watches that’s what the brand Hanhart stands for.” – Felix Wallner, CEO of Hanhart.”

Whenever someone references watches that originate from the Black Forest, then inevitably Junghans comes to mind. Yet Hanhart is also another world class watchmaking company that’s headquartered there. While Junghans was at some point the largest watch manufacturer in the world, Hanhart was considered an industry leader for mechanical stopwatches as well as one of the most famous producers of premium pilot chronographs. Vintage Hanhart chronographs shouldn’t be missing from any serious pilot watch collection and the Caliber 40 manufactured in the 1930s is considered a cult classic. Today, Hanhart tries to plug into its grand past with its small but significant portfolio mainly consisting of different kinds of chronographs with one or two pushers. The most prominent signature design element: an accentuated, red coated chronograph pusher.

Watch Highlights in the Video

The Hanhart Pioneer MonoControl pays tribute to the pioneering spirit of the production of monopusher chronographs that began back in the 1930s. Once created a monopusher chronograph explicitly for naval officers, it incorporated the legendary in-house caliber 40. Here, Hanhart attempts to bring a classic monopusher into the modern day. The Caliber HAN3911 is based on an ETA/Valjoux 7750 and is the heart that ticks within this timepiece. Hanhart has implemented a modified cam in order to make this classic caliber into a monopusher chronograph. The watch has a case measurement of 42 millimeters. Anyone looking for more discreet measurements should have a look at the Hanhart TwinControl that has two pushers and is two 2 millimeters less in diameter.

While the TwinDicator’s design orientates towards earlier chronographs from Hanhart, it actually has a second chronograph pusher. Since the start/stop function and the reset are separated from one another, it enables multiple time measurement intervals, just as you’d expect from a modern chronograph. Compared to the Pioneer MonoControl, the MonoScope is significantly larger with a measurement of 45 millimeters. It also has widely placed subdials, reminiscent of earlier 1930s chronographs in their size, which is another difference when compared directly to the MonoControl. The caliber HAN4011 that ticks inside is also incorporated in the Primus Diver Collection and is based on the ETA/Valjoux 7750, just like the HAN3911. Next to the model seen on the picture, there is also a white dial version available. For anyone that is more interested in a nostalgic monopusher chronograph: the Pioneer Monoscope is nearly identical to the TwinDicator with just one chronograph pusher.