To say that the Swiss watch brand Doxa lives a shadowy existence would be presumptuous. What can be said, however, is that the brand has not always enjoyed the reputation it deserves in recent times – especially when it comes to diving watches.

After all, it was the Biel-based company that was the first to make a diver’s watch with an orange dial and rotating bezel, including decompression times, so popular. But even more important was the use of a helium escape valve, which Doxa pioneered at the time. In collaboration with Rolex, the company co-developed this feature in the 1960s, but managed to bring it to market maturity first: In 1969, Doxa presented the 300T Conquistador, the first mass-produced diver’s watch with a helium escape valve, while the first Sea-Dweller for the consumer market was still two years away.

After a few years of bumming around, the brand now seems to be back on track, doing what it does best: high-performance diving watches with bright colors and at fair prices. These are the core values that Doxa enthusiasts (and diving watch fans in general) have always appreciated about this unpretentious brand.

For a few years now, Doxa has had a run of great releases, attempting to do everything possible to make up lost ground as quickly as possible. After the launch of the SUB 300 Carbon Aqua Lung US Diver in a limited edition and after the Sub 300 collection relaunched in 2015, Doxa also added a chronograph to its Sub 200 range last year.

It’s the Sub 300 watches that now received a special honor in the form of a unique case material: The iconic collection is now available in forged carbon and in a non-limited edition.

The case, measuring 42.50 x 45.00mm, houses all the key elements that enthusiasts love so much about the Doxa design classic. There is for example the cushion-shaped case with the short lugs, which makes the generously sized case also very comfortable to wear on narrower wrists. The patented bezel with two separate scales and the uncluttered dial with the oversized minute hand are of course also back on board.

The highlight, however, is the aforementioned case made of carbon fibers, which make the new watches as light as a feather compared to their steel counterparts. In addition, the forged carbon has a very cool look to it: In the uneven pattern, a result of non-directional, superimposed carbon fibers, nuances of anthracite and deep black alternate, resulting in an iridescent effect in different light. Compared to black ceramics for instance, which is classically sleek black and homogeneous, the new Doxa Sub 300 Carbon appears matt, almost rough and simply high-tech.

As opposed to the spectacular case upgrade, Doxa takes a more leisurely approach to the inside of the case. With the ETA 2824-2, the brand does make use of a real workhorse, which has been a go-to caliber for decades thanks to its longevity and precision, but also one which no longer really knocks anyone’s socks off. Moreover, it’s a caliber used it much more affordable watches as well (more on that in a moment). However, the additional COSC certification, which attests to the calibre’s chronometer accuracy, is a nice add-on.

Together with the FKM rubber strap, the watch weighs in at just 87g thanks to the carbon case. In combination with the bright colours, this makes the newly launched Sub 300 Carbon COSC a predestined summer watch in our eyes. Even though it was initially designed for use on a wetsuit, it looks just as great in combination with shorts and a T-shirt.

The MSRP for all 10 new models is €3,790, which is arguably no bargain given the movement used, but somewhat justified by the carbon case that is difficult to manufacture. 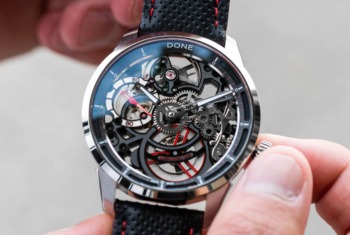 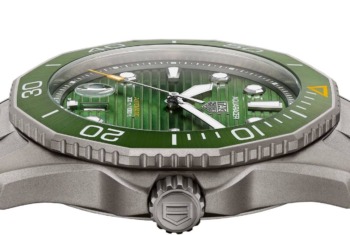