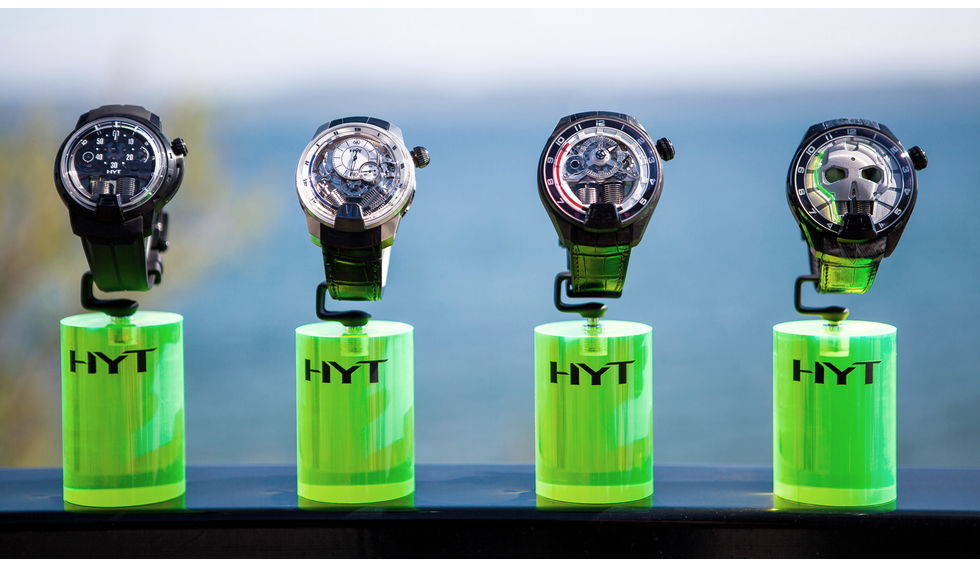 “We are liquids and we are mechanics and we are in the high-end watchmaking industry.” – Vincent Perriard, Co-Founder and Member of the Board of HYT

If there was ever an idea that sparked the foundation of a truly unique watchmaking company, HYT might very well have it covered: combining liquids with mechanics inside of a fully functioning wristwatch. HYT might be a relative newcomer to the watchmaking industry, but together with the brand’s partners PRECIFLEX and APRP, it’s out to create something that’s truly one of a kind.

While measuring the time itself with fluid may not be an entirely new concept, e.g. the Egyptian Clepsydra “water-thief” clock from 1500 B.C., HYT’s collection is a modern-day take on this union of polar opposites. It’s a remarkable amalgamation, considering water has been the nemesis of mechanical watch movements for hundreds of years. HYT and its partners haven’t only run wild with this invention, but pool their expertise and know-how from a wide range of interdisciplinary skill sets such as artistry, engineering, and even glassblowing.

The result is the fluid module: a system with 30 components that has two bellows, which are filled with two kinds of liquids and connected with one another by a thin, glass capillary. These liquids, transparent and coloured, are kept apart from one another by molecule repulsion force. A piston compresses the bellow, releasing liquid into the capillary and the ebb and flow serves to indicate the time. After the fluid module is constructed, it’s combined together with the watch’s movement in an elaborate process.

“The future has no limit. The future is the sky.” – Vincent Perriard, Co-Founder and Member of the Board

As far as HYT is concerned, the brand has set no limits in terms of the watchmaker’s capacity for combining liquids and mechanics in extraordinary forms. In their own view, the sky really is the limit and the brand has certainly set the bar very high with collections of exceptional timekeepers that are quite like nothing ever seen before.

We get our first look at one of HYT’s remarkable creations, the Skull Green Eye. At 51 millimetres, the manual winding watch has a raised skull placed in the middle of the black dial. The Skull Green Eye’s green fluid indicates the hours and seconds and the in-house calibre oscillates with a frequency of 28,800 vph. The timekeeper has grey anthracite indexes, numerics, and a power reserve is indicated by its glowing left-eye.

It might be a bit early for Halloween this year, but HYT’s Ghost themed piece is ready to send shivers down your wrist. The watch has a dimension of 48 mm with a black face as well as white indexes and numbers. There’s a lot of action on the dial with a minute counter located at 12, small seconds at 9:30, and power reserve indicator at the 2:30 positions. The Ghost has a domed sapphire crystal as well as a titanium screw-down crown located at the 2 position, guarded on either side by crown protection. The timepiece also has an opaque liquid that is unique in HYT’s repository of liquid colours, which indicates the time over the Friedrich module system.

The H3 is a showcase watch for HYT’s total skill in combining liquids with mechanics. With a case diameter measuring 62 mm, the timekeeper has a rectangular shaped case made from PVD coated titanium and platinum. The time is depicted in a 24 hour format by six cubes which rotate every six hours, a minute indicator, and the liquids within the capillary. The timekeeper also has a vast amount of power reserve at 170 hours (7 days) and has only been released in a very limited run of just 25 pieces.

Combining the old with new, the H2 Tradition is a unison of the past with the present. Clocking in at 48 millimetres, the watch has a titanium and white gold case. The H2 Tradition is manually wound and oscillates with a frequency of 21,600 vph. The blue liquid indicates the hour and is fused together with a more conventional means of reading the time over its hour and seconds dials with blued indicators, located respectively at the 12 and 2:30 positions. In sync with the watch’s guiding colour theme, the Tradition is rounded out by a blue alligator strap.