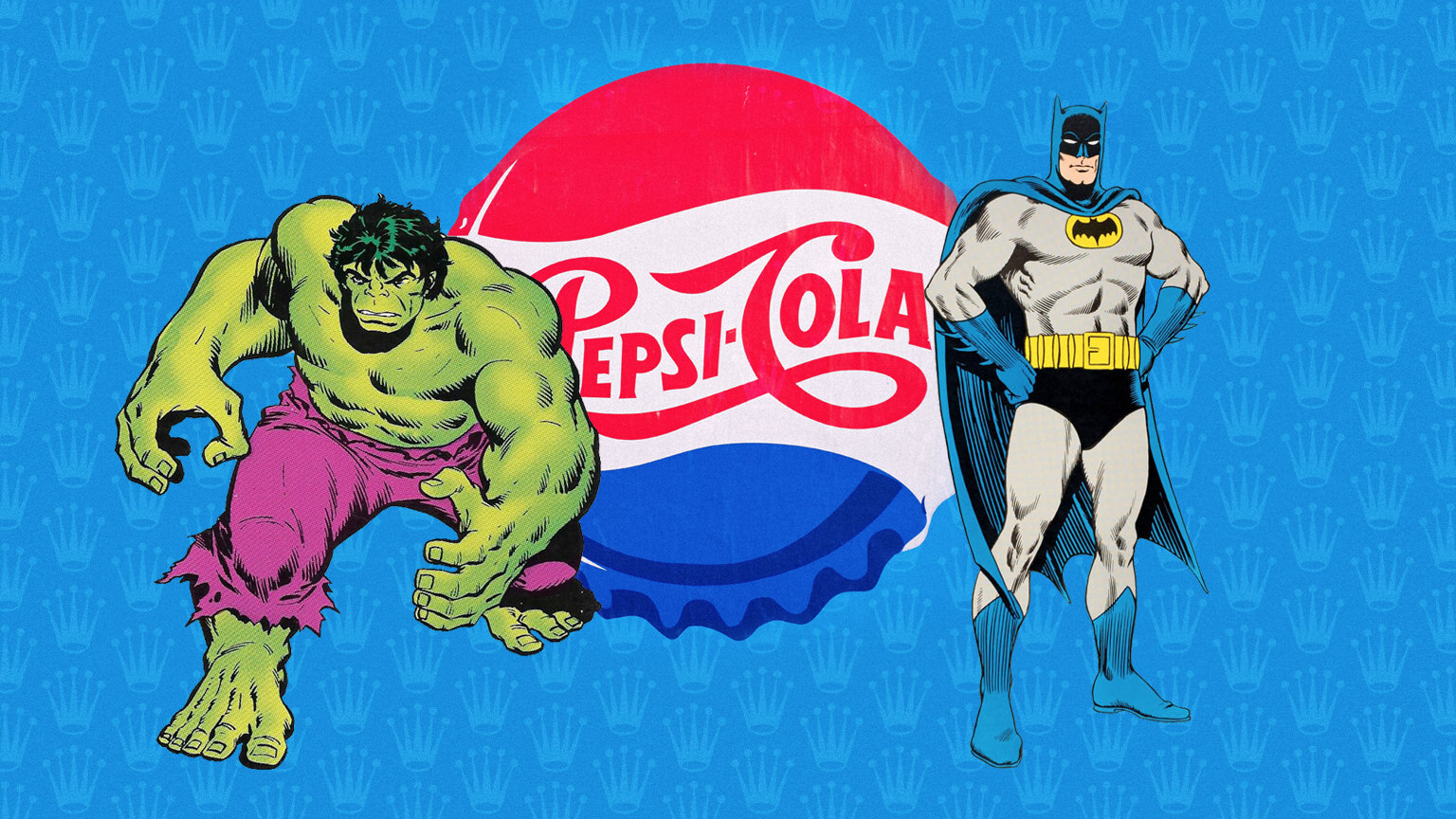 The cult of Rolex watches has already produced a number of nicknames that are now so common and widespread that they often make the official names obsolete. While nearly everyone knows what to do with “Pepsi Rolex”, “126710BLRO” still separates the wheat from the chaff.

We have visualized our top 7 nicknames of Rolex watches in a graphically highly sophisticated way for you.

Let’s get right into it with the Rolex Root Beer. In the current reference 126711CHNR, the “CHNR” (for Châtain et Noir = chestnut brown and black) of the bezel is particularly important for the nickname. The two-tone bezel together with the Rolesor combination of stainless steel and 18-carat Everose gold gives the watch the look of the popular fizzy lemonade from the USA.

The Rolex Smurf was already introduced in 2008. The blue color on the dial and Cerachrom ceramic bezel (which by the way was patented by Rolex only in 2005), left fans to name the watch after the iconic little creatures from Smurf Village. Despite the Rolex logo, the white-gold watch even flies under the radar to a certain extent, since the hefty price tag is not directly obvious to watch laymen due to its similarity to steel watches.

It can of course be seen (and read) at first glance who was the namesake of this watch with the two-tone ceramic rotating bezel: Bruce Wayne aka Batman from Gotham City with his legendary blue and black outfit from his early days.

Legend has it that Rolex was actually interested in re-launching the original GMT Master with a red-blue Pepsi bezel, which was introduced in 1955. However, since the results with red ceramic were inadequate and could not yet meet Rolex’s strict quality criteria, a stopgap solution had to be found in 2013: the 116710BLNR. This reference got updated again at Baselworld 2019 with a new calibre and a Jubilee bracelet.

In 2003, on the occasion of the Submariner’s 50th birthday, Rolex had the great idea of bringing a little more colour into the game. In Rolex style, the whole thing was approached in a rater leisurely manner, because why color an entire watch green, if you can start with the bezel only. Said and done: In 2003, the Rolex 16610LV (LV = lunette verte = green bezel) was officially launched.

Even though many people were not exactly happy with the green aluminum bezel and the watch met with skepticism, it was soon accepted. Just as Rolex fans started to like the greenish Submariner, however, the watch was discontinued again in 2010. Since then prices of the model (especially with the coveted “Flat” 4″ bezel) have gone through the roof on the secondary market.

Rolex and soft drinks, that seems to be a match. The Rolex Coke is, besides the Kermit, the only watch on this list that is currently no longer in production. So as a watch fan with true purchasing intentions, one has to revert to used models.

The first Rolex GMT-Master II with red-black bezel (Ref. 16760) was launched in 1983 and instantly reminded the fans of the brand’s refreshment drink with the red labels. Due to the slightly increased case dimensions, the first watch was also called “Fat Lady”.

Rolex must have thought that completely abolishing a green watch is not an option. So to please the alienated watch lovers who were still waiting for their Kermit, an even greener watch was promptly introduced in 2010: the Hulk (Ref. 116610LV).

However, the two watches could hardly be more different: The Kermit’s aluminium bezel has now been replaced by the newly developed Cerachrom bezel. Despite the common diameter of 40mm, the Hulk is also much more prominent on the wrist due to the new “maxi case”.

The increase in value on the second-hand market is an interesting matter as well: Although the Rolex Hulk is still listed in the brand’s current lineup, the rumors about the watch being discontinued any time soon simply don’t stop; and which direction the prices of a discontinued Rolex will take is probably also known. If you can get your hands on one now, it could very well pay off in a few years from now – in the truest sense of the word.

The seventh and also last watch is the Rolex Pepsi, a true watch icon. Unlike the Hulk, for example, basically any watch that has the red-blue bezel can be called a Pepsi, as the nickname is not limited to a reference number.

The current reference was highly anticipated, because ever since the ref. 16710 in stainless steel was discontinued, many Rolex fans waited in vain for a new, affordable Pepsi Rolex for a long time. By the way, the history of the two-tone bezel goes back a long way: In 1955, the reference 6542 was introduced as a watch for the US-American Pan American Airlines (PanAm). It was the first time that a Rolex watch featured the colour combination on the bezel that is so immensely popular today.

At Baselworld 2018, a long-cherished dream of many finally came true: After the white gold version from 2014, the stainless steel watch with Jubilee bracelet and new 3285 caliber was finally launched. The demand was of course immediately high. Oh and by the way, we probably don’t need to mention at this point anymore where the nickname of this watch stems from.

Of course, there are many more and more exotic nicknames with models like Stelline, Blueberry or Patrizzi, but with these seven you are good to go.