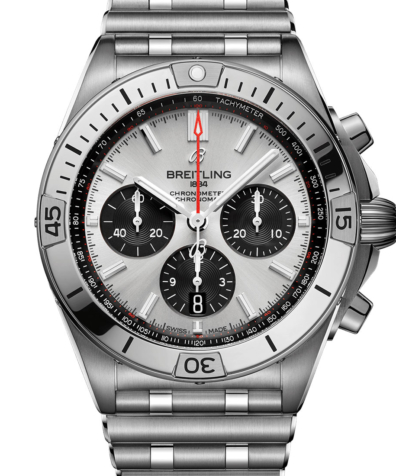 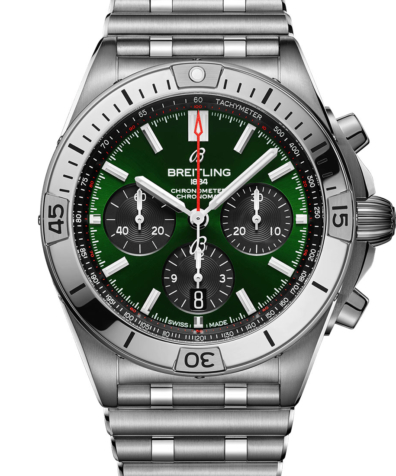 Much of what originally made the Navitimer so attractive, is now a large aspect of all that the Chronomat has to offer. For more than seven decades, the Chronomat was the most innovative model on the market. Truth be told, the Chronomat had a perforated edge and a slide rule way before the Navitimer even launched. Its position as a brand flagship from Breitling was solidified when it became the first model to have the manufacture movement Breitling 01. For seven decades, the Chronomat was the Top Gun among all aviation watches. Thanks mostly in part to its high reliability, it eventually became the official watch of the US Air Force. It’s a very diverse series and among its offerings are: the Chronomat Airborne, the Raven, and GMT models.

Today, the Chronomat thrones at the very top of Breitling’s Haute Horlogérie. This brand has also gotten with the times and completely rethought its approach to case dimensions by offering sizes in 38, 41, and 44 mm and it’s aiming hard to close any gaps to newcomers. The smallest among these, the Sleek T, is keeping the ladies more in mind. However, it’s still a very flexible timepiece that can even be worn as an elegant sports watch by gentlemen with thinner wrists or those who just like things a bit more compact. We can’t stop talking about this sub-40 Chronomat here at Montredo, with its smooth bezel and very tight dimensions. It perfectly captures the essence of chronographs from the 1930s and 1950s.

Multiple Chronomat models have three totalisers which display the elapsed time at the 3, 6, and 9 positions. Most of the collection is available in stainless steel cases. However there’s a few gold models, some with steel cases, and even a few gold bezels that are also available. The price tag of Breitling’s flagship is a bit more premium than the Colt, Avenger, or Superocean versions. Originally, models were only available with a hand winding mechanism, but that’s changed over time and they are now only offered with an automatic movement. The Chronomat Airborne has eye-catching sub dials and next to the Blackbird and the GMT, it’s the most beloved versions in the series.

2: Two features that originally belonged to the Chronomat

Even though they have their origins in the Chronomat, two specific features are often associated with the Navitimer. Multiple mathematical calculations can be made with the assistance of the slide rule and the aid of two non-linear scales that can be configured by the rotating bezel. When the two outer and inner scales are synchronised, it’s even possible to calculate distance (miles/kilometres), temperatures (Fahrenheit/Celcius) or even currencies.

The diversity of the Chronomat enables a wide range of functionality in aviation, which in turn automated quite a lot of different tasks for a pilot in the 40s and 50s. Ultimately, electronic on-board instruments can’t really be compared to the flight electronics in use today. Along with the slide rule, there is also the Navitimer’s typical, grooved case edge that was originally used in the Chronomat. It was already an essential component, by the first Chronomat (reference 769), in its entire design and provided a good grip when turning the outer numbered ring.

The Chronomat really is a genuine old-timer in today’s most recent collection and its model history stretches as far back as 1942 (the developments stages go even further to the late 30s). In the 1980s, the design of the Chronomat was reworked to be a bit more modern. However, there’s still quite a few versions in the collection, which have an earlier look from the 40s and 50s. It had the typical (for the time) dimensions of 35 mm without a crown in its beginning stages. Now, there’s more moderate case measurements of 38, 41, and 44 millimetres. It’s a model which has undergone a substantial amount of visual changes over the years, but design elements of its earlier versions are still reflected in the Navitimer and Montbrillant collections.

The Chronomat was the first Breitling equipped with a manufacture movement. Since 2009, the Breitling 01 has been incorporated into the 30 mm sized Chronomat collection and oscillates 28,800 times per hour. This in turn enables a power reserve of up to 70 hours. For all those that fall into the category of “work week” watch wearers, you could technically take off this watch on a Friday evening and Monday morning, still have enough energy to keep it going. Since most Chronomat models are equipped with the base Breitling 01 movement, there’s quite a few versions with the same Tri-Compax arrangement of totalisers at the 3 and 9 positions.

The manufacture guarantees a 5 year warranty for multiple Chronomat versions equipped with the Breitling 01. This is an increase of 3 years over the general luxury watch warranties of other manufactures of just 24 months. However, Rolex expanded its warranty coverage to 5 years in 2015.

A Chronology of the Chronomat

1940: The invention of the rotating slide rule was patented already two years before the Chronomat launched.

1942: The Chronomat is released and along with its slide rule and its chronograph functionality, is one of the most popular pilot’s watches. Shortly thereafter, the Chronomat becomes the official timekeeper of the US Air Force.

1969: The Chronomat gets a Chronomatic calibre, the Calibre 11, which is developed jointly with Buren, Leonidas-Heuer, and Dubois-Dépraz. A micro-rotor functions as an energy facilitator. The Chronomat reference 818, just like the legendary Heuer Monaco, has the crown positioned on the left-side.

2009: As one of the first Breitling models, the Chronomat incorporates a manufacture calibre and is covered by a five year Breitling warranty. The new movement, known as the Breitling 01, provides the Chronomat with a power reserve of 70 hours.

2015: Breitling presents the Chronomat SleekT 38. It’s equipped with a Breitling 13, which was originally based on a TAG/Valjoux 7750, and signifies that Breitling is placing its bets on watches with more moderate case dimensions.