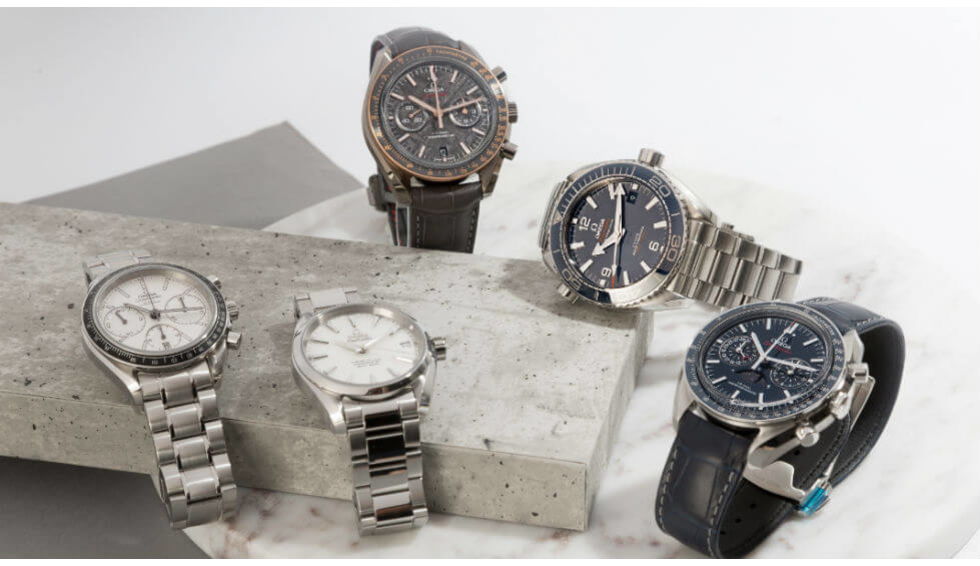 Watch lovers everywhere top their wish lists with an Omega. True to its name, the brand represents the ultimate standard for luxurious and sturdy wrist watches. First and foremost, Omega’s cult status resides with its sporty chronographs, above all with the Speedmaster.

Omega’s collections like the Speedmaster, which is celebrating its 60th anniversary this year and became one of the most famous watches of all time thanks to their involvement in the moon landing, the Seamaster and the Constellation are true icons of watchmaking history. New and used models are in demand more than ever.

The selection and the diversity of both current and pre-owned watches seem immense and often differ in the details, such as numerals on the dial, case sizes and material varations, shapes of the watch hands, as well as special features such as a tachymeter. Even whithin the model families themselves, there are subtle distinctions. For example, the Seamaster comes in a Seamaster Diver, a Seamaster Planet Ocean and a Seamaster Aqua Terra. You can quickly lose track and even self-proclaimed Omega fans can sometimes get confused.

The international online community and fan club have grown significantly in recent years. Several internet forums dedicate themselves entirely to the legendary Speedmaster. There, the brand loyalists all over the world compare and discuss the specifics of individual models including minimal differences of the multitude of references, for example, the “broad arrow” or “lollipop” hands in the Speedmaster models.

Even declared Omega specialists admit to occasionaly struggle with keeping a mental map of the many different special editions and individual models, which fall outside the standard line up.

To present the stunning variety of the Omega watch world in a manageable format, we have researched their guidelines for product identification for you. Please note that the following list of current reference numbers does not claim to be complete nor is it to be used instead of professional buying advice. It is only meant to support the understanding of the nomenclature.

The Structure of an Omega Reference Number

Each model of Omega watch has an unique identifier, the so-called product identification code or PIC for short, which consists of 14 digits.

The first three digits identify the collection, such as 311 for the Speedmaster, the next two explain the housing and band material. The number 13 for example is synonymous with stainless steel case and non-metal band. The third set of digits defines the diameter and the height of the housing. In fourth place, another two-digit number provides information about the nature of the movement, mechanical or quartz, as well as possible complications, and whether or not it is a chronometer-certified movement. The combination of 22, for instance, indicates that we are looking at a mechanical movement with two additional functions, date is not included. The penultimate number refers to the type of the dial, for example 01 is purely and simply a black dial. 63 on the other hand stands for brown dial with gemstone. The last three digits refer to the sequence number of the production.

The designations of caliber and year are however not included in the PIC. Also, the degree of water resistance and the nature of the non-metallic straps cannot be deduced from the 14 digit code. It could be made of rubber, leather or even fabric.

The metal bands on the other hand are relatively explicit in their numeration. Besides identifying the type of metal, it also defines whether it is for example a bi-color strap of stainless steel and gold, or whether it has precious stones.

CC = Diameter rounded up to the nearest decimal place

2. Deciphering Panel for the Omega PIC

32 = Stainless steel with “other material” and non-metal bracelet

Even if it seems complex at first sight and requires some effort and time, this guide provides a reliable initial assessment tool and insight in preparation of a watch purchase. Nevertheless, the system leaves some questions, which can only be answered with the Omega collection book or by consulting a retailer, such as determining the caliber, the heart of the watch.

Three of the Most Popular Omega Classics

This year, the famous Speedmaster celebrates its 60th anniversary. Since its inception in 1957, the watch icon has been heading up the list of most popular chronographs of all times. Its multiple versions, which all pay homage to the successful original design, inspire collectors to this day. The legendary Moonwatch with its precise moon phase display, which is photo realistically represented in minute detail thanks to the metallic crystal glass display once again manifests its claim to fame in this version. Also new this year is the Speedmaster Moonwatch Omega Co-Axial Master Chronometer Moonphase Chronograph 44.25 mm (PIC: 304.30.44.52.01.001) with a tachymeter scale made of black ceramic and liquid metal. The timepiece is powered by Omegs’s automatic Co-Axial Master Chronometer 9904 with official METAS certificate. This watch comes with an impressive 15,000 Gauss resistance and has a 60-hour power reserve.

Seamaster Aqua Terra – The Best of Both Worlds

In addition to the Speedmaster the sporty yet elegant Seamaster has also earned cult status. In 2002, Omega expanded the very popular watch family with a remarkable new line: the Seamaster Aqua Terra (PIC: 231.10.39.21.03.002). The name of the collection was a tribute to the spirit of the classic Seamaster models, which were renowned for their reliability to water (aqua), as well as on land (terra). The most distinctive design feature is the stunning teak dial, inspired by the planks of luxury yachts. It sports a self-winding movement, the Co-Axial Caliber 8500 with a power reserve of 60 hours. The 38.5 mm case guarantees water resistance to 150 meters.

While the Seamaster Aqua Terra and the Speedmaster emphasize on a sporty and adventurous style, Trésor de Ville (PIC: 432.53.40.21.02.002) is known for its simple elegance. The slim gold case with a height of only 10.6 mm frames the minimalist dial with classic Clous-de-Paris-décor, which radiates the charm of past times. In contrast to its vintage-inspired exterior, the mechanical movement of the Trésor De Ville ticks with chronometric precision. It is the master co-axial caliber 8511 with manual winding, equipped with a silicon spring balance, the co-axial escapement and omegas anti-magnetic technology. The excellent craftsmanship is showcased through the sapphire glass bottom.