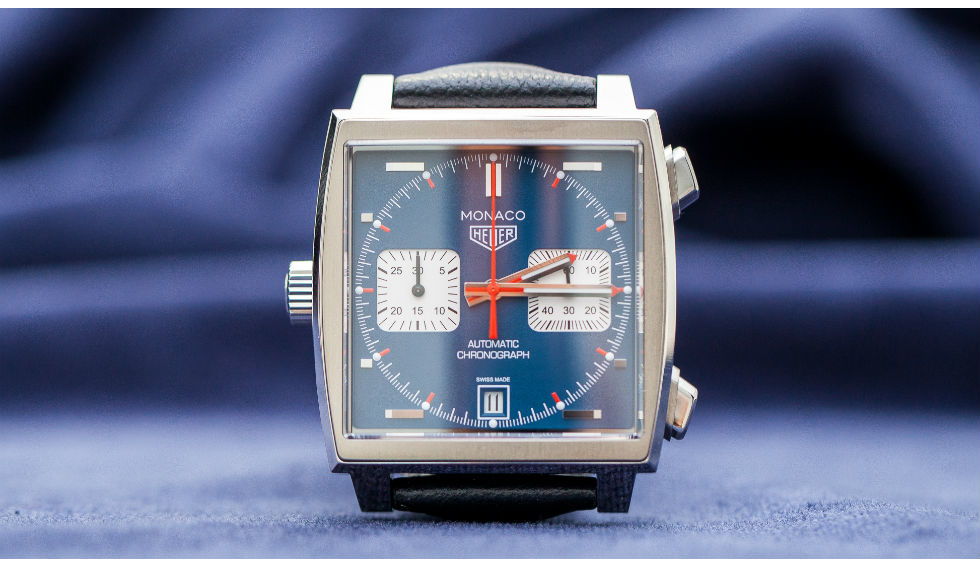 Precision and performance define every second – this principle applies to the world of Formula 1 racing as much as it does to the world of watchmaking. That is why so many watch models have emerged from this symbiosis. One of the most famous timepieces in this genre is the Monaco of TAG Heuer, which was introduced almost 50 years ago and is highly sought after by collectors. In particular, the unmistakable “McQueen Monaco” which many have tried to copy but none can rival, is an icon among collectors of race-themed watches.

The noise of roaring engines and the smell of burnt rubber are in the air, rev the motor and the merciless race begins: the legendary film “Le Mans” made in 1971 with Steve McQueen in the lead role lets you experience the thrill and dangers of the emerging sport in spectacularly cut scenes. At the same time, it puts the watch on McQueen’s wrist in focus – the Monaco Chronomatic Calibre 11 by Heuer. This movie underscored the close ties of the Swiss luxury watch brand to the world of motor sport. These ties were cast in the beginning of the 1960s with the launch of the equally legendary Carrera designed by Jack Heuer, and the relationship extends to the present day. Prominent racing drivers and fans of the brand such as Niki Lauda, Jochen Rindt and Jo Siffert contributed to Tag Heuer’s fame with their appreciation of the many technical innovations TAG Heuer developed exclusively for precision timing in the competitive motor sport.

We have compiled the most relevant facts which every watch aficionado should know about the “coolest” watch of the 1960’s.

That is right, with a caveat: The famous Chronomatic Calibre 11, the product of a collaboration of Breitling, Leonidas, Hamilton/Büren and Dubois Dépraz created, was designed simultaneously with the El Primero from Zenith. However, it was presented a little later, to be precise on March 3, 1969, in Geneva and New York. So, the competition took the winner’s lap by a hair. The Chronomatic Calibre 11 whith its coulisse lever system had a diameter of 31 mm and a height of 7.7 millimeters. Inside the chronograph module, a micro rotor provides efficient power.

Incidentally, Seiko also took part in the competition for the first chronograph caliber: the Japanese company had begun in 1967 with the development of an automatic chronograph. It is impossible to fairly and accurately place the winners of this race in their respective podium positions.

In contrast to the above, this record is squarely established by the housing of the Monaco. It was the first non-round case of a Swiss Watch, which provided absolute water-tightness. The waterproof square housing was a sensation and novelty in horology as anything other than a circle is difficult to seal and until the launch of the Monaco only round cases could we waterproofed. TAG Heuer had literally pushed the edge of the circuit and squared the ring of housing precision. This innovation can be attributed to the enclosure manufacturer Piquerez, who had developed a new seal system. Four notches clicked into place in the back of the case and the tension generated a compression seal.

On the Monaco’s debut 1969 in Geneva and New York, the large square case initially breached the strict specifications of conventional watch faces and was snubbed by traditionalists. While opponents were turned off by the bold appearance, the Monaco quickly gained momentum among lovers of striking timepieces. Its refreshingly different dial in petrol blue with a bright red chronograph seconds hand, red indexes, and square counters set a new trend, which would frequently be copied in its future.
No wonder that the declared cult watch has been adhering to this distinctive appearance throughout the years. The reissue in 2005 emphasizes the square shape of the stainless-steel housing even further. The case consists of three parts which are joined by four screws. The two push buttons at 2 and 4 o’clock are square, the band hinges more pronounced. Also, the current version has a Sapphire Crystal bottom to show the legendary caliber in its full glory.
The Calibre 11 received a red dot award in the product design category in July 2017, proof that the unique design continues to be appreciated by design specialist to this day.

In order to make the Monaco to be noticeable as an automatic chronograph that does not need hand-winding, the designers and watchmakers of Heuer decided to place the crown on the left side of the housing. This has turned a new chapter in the history of watchmaking, as it has never been done before. Visually, it emphasized the novelty of the self-winding movement. Appearance aside, the unconventional placement of the watch crown also serves a functional purpose, as it enables faster operation of the two chronograph buttons, which remained on the right side of the watch

The reason why the Monaco is known as the racing watch par excellence beyond any competition can be attributed to Heuer being the first watch manufacturer to sponsor a race car driver. They bet on Jo Siffert, one of the best drivers of his time. Heuer allegedly paid him in watches. A smart move, because in the film Le Mans Steve McQueen wore Jo Siffert’s racing suit which prominently displayed the Heuer logo.

Classic with corners and edges

Since the Monaco first crossed the finish line in 1969, she has appeared in many design variations, some of them limited editions. Instead of racing the latest fads of fashion or following short-lived trends, TAG Heuer has stayed true to the original aesthetics of its iconic watch and has created a classic that withstands the follies of time. Over the decades, the Monaco has actually even gained in appeal and in value. The Monaco V4 is the most spectacular of the variations in technical terms. The launch in 2004 at Baselworld stunned the watch industry with its linear oscillating-weight and ball bearings. Ten years later TAG Heuer again presented avant-garde haute horologerie in a Monaco, the V4: the first belt-driven Tourbillon.

The current version from the year 2015 seamlessly builds on the angular beauty of the former Rebel. All the typical characteristics are present: the 39-mm-diameter, the crown on the left side, the petrol-blue dial with the two square counters, the date window at 6 o’clock, the horizontal hour indexes set with diamonds and the original Heuer logo. In honor of the fascinating history of the Monaco line, the new edition emphasizes the square shape of the stainless-steel casing even more. Since 2009 it has been equipped with a sapphire crystal bottom to show the impressive caliber. The housing consists of three parts (since 1998), with four screws. The two push buttons at 2 and 4 o’clock are also squared, the hinges for the racing themed stylish perforated calf leather strap are more pronounced.